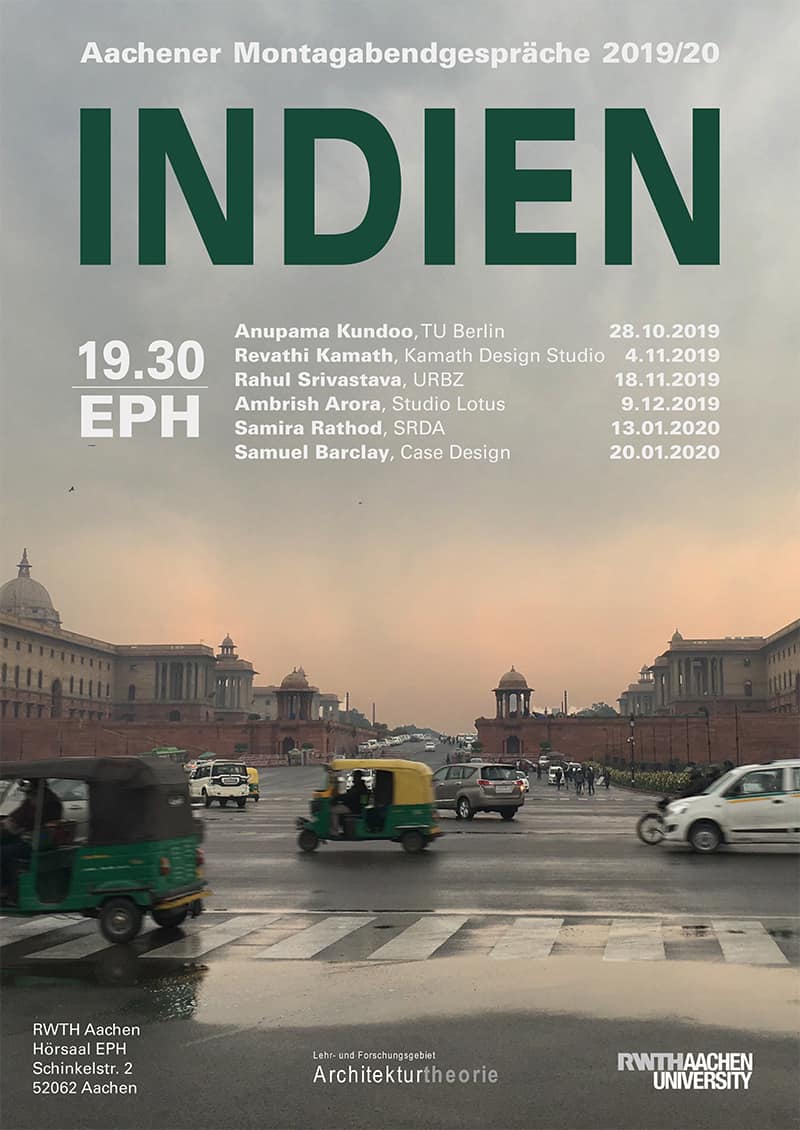 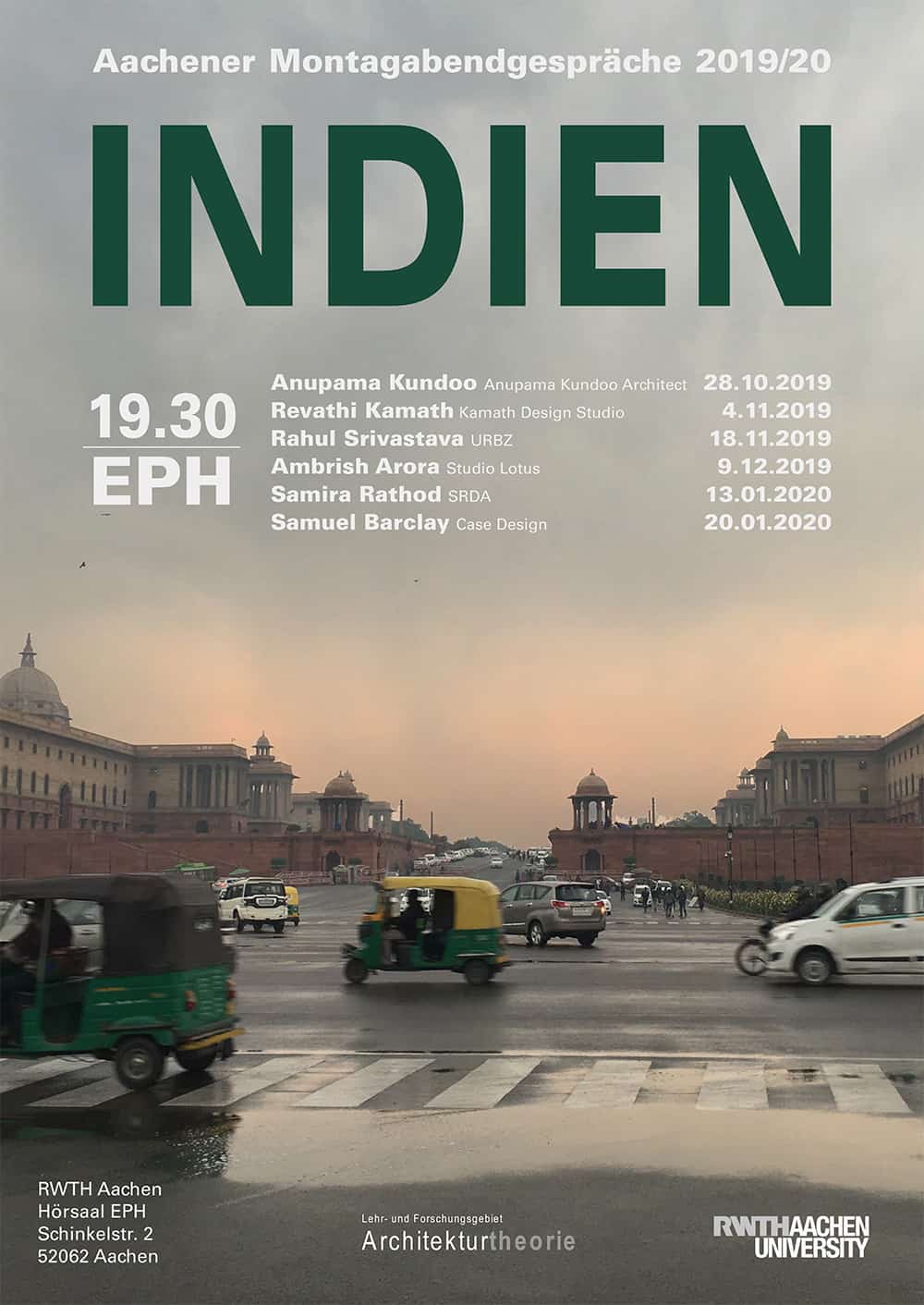 Anupama Kundoo’s internationally recognised and award-winning architecture practice started in 1990, demonstrates a strong focus on material research and experimentation towards an architecture that has low environmental impact and is appropriate to the socio-economic context. Kundoo has built extensively in India and has had the experience of working, researching and teaching in a variety of cultural contexts across the world: TU Berlin, AA School of Architecture London, Parsons New School of Design New York, University of Queensland Brisbane, IUAV Venice and ETSAB Barcelona. She is currently Professor at UCJC Madrid where she is Chair of ‘Affordable Habitat’. She is also the Strauch Visiting Critic at Cornell University.

Kundoo’s work extend to urban design and planning projects, with her background in rapid urbanisation related development issues, about which she has written extensively. She taught urban management at the TU Berlin and recently proposed her strategies for a future city for Africa, as part of the Milan Triennale 2014. She is the author of ‘Roger Anger: Research on Beauty/Recherche sur la Beauté, Architecture 1958-2008’ published in Berlin by Jovis Verlag in 2009. Her latest publication is a book chapter ‘Rethinking affordability in economic and environmental terms’ in the Routledge book ‘Inclusive Urbanisation: Rethinking Policy, Practice and Research in the Age of Climate Change’, 2015.

Anupama Kundoo was born in Pune, India in 1967. She graduated from Sir JJ College of Architecture, University of Mumbai in 1989, and received her PhD degree from the TU Berlin in 2008. In 2013 Kundoo received an honourable mention in the ArcVision International Prize for Women in Architecture for ‘her dedication when approaching the problem of affordability of construction and sustainability in all aspects’. (Quelle: Website Anupama Kundoo Architect)

Born in Bhubaneshwar, Orissa, in 1955. She obtained her Bachelors degree in Architecture in 1977 and a Post Graduate degree in Urban and Regional Planning in 1981, both from the School of Planning and Architecture, Delhi.

In 1981, she opened a firm with Vasant Kamath, „Revathi and Vasant Kamath“, which later came to be known as „Kamath Design Studio – Architecture, Planning and Environment“ (2005). The studio has handled a wide variety of projects, in diverse social, economic and geographical contexts. The Anandgram Project for Rehabilitation of slum dwellers near Shadipur Depot, Delhi was one of the earliest in early 1983. Revathi Kamath is noted for her sensitive efforts for conceiving the „Evolving Home“ concept for redevelopment. She consulted with 350 families to understand individual needs and to give them a first home on the ground.

Three of her projects have been nominated for the Aga Khan Award. They are the Akshay Pratishthan School in Delhi, Community Center at Maheshwar and Nalin Tomar House at Hauz Khas, Delhi.

Revathi has contributed to the exhibition – „Traditional Architecture in India“ for the festival of India in Paris, in 1986. She was also on the contributing design team for the Eternal Gandhi Multimedia Museum. She was co-curator and designer for the exhibition „Craft: A Tool for Social Change“ for VHAI (Voluntary Health Association of India) in 2003. She is currently working on the Museum for Tribal Heritage, Bhopal, the Gnostic Center, Delhi, a research center for growth of consciousness, Jiva Wellness Center and Jiva University for Yogic Sciences (Quelle: Website Kamath Design Studios and Wikipedia)

Rahul Srivastava is a co-founder of the Studio “urbz” and The Institute of Urbanology. He studied social and urban anthropology in Mumbai, Delhi and Cambridge (UK). His previous publications include an ethnography of urbanized nomads around Mumbai, a novel published by Puffin, (Penguin, India) and ‚The Slum Outside‘, a commentary on Dharavi, co-written with Matias Echanove and published by Strelka Press. He continues to write extensively on urban issues with Matias, with their next major publication signed up with Verso, London. He brings his background in anthropology and visual ethnography to urbanology, the practice that energises much of urbz’s work in Mumbai and elsewhere. (Quelle: Website urbz)

Ambrish Arora is founder of  and Design Principal at Studio Lotus, a New Delhi-based multi-disciplinary design practice. Spanning the domains of Master Planning, Architecture & Interior Design the work of the award-winning practice, is grounded on the principles of Conscious Design – an inclusive approach that focusses on a rigorous process as much as the end result. Presently, Ambrish plays the role of Chief Mentor to the team.

Through his practice, Ambrish has also campaigned for the revival of crafts and the integration of vernacular wisdom and artisanal skillsets in modern building practices, as a means to achieve cultural, social as well as environmental sustainability often through frugal and passive means relevant to the sub continent. Ambrish has been a part of several National advisories and Juries on Design & Architecture and has extensivley lectured internationally and within India and has a keen interest in building design leadership as a catalyst of change.

Samira graduated from the Sir. J. J. College of Architecture, Mumbai in 1986 and soon after completed her Master in Architecture from the University of Illinois, Urbana – Champaign in 1988. While in the States she worked on several projects under Don Wald and Associates based in California, including personal projects of Clint Eastwood. Upon her return to India, she worked with Ratan Batliboi for several years before starting her own partnership firm RLC in 1995.

In 1996 she stepped into the limelight with her solo furniture exhibit ‚Liasons de Formes‘. Thereafter in 2000, she founded her solo practice Samira Rathod Design Atelier, which has grown over the years. She was involved in furniture design under Transforme Designs until 2003.

Her passion for writing, theorizing and discussing architecture led her to be the editor and creator of SPADE and founder and director of SPADE INDIA RESEARCH CELL which candidly deliberates, investigates and researches the condition and impact of design in India. Samira believes in cultivating talent and a strong sense of design in today’s youth and is a adjunct faculty member at the Kamla Raheja Institue of Architecture in Mumbai and has been invited to be a part of juries and panels all over the country and abroad. (Quelle: Website SRDA)

After earning bachelor degrees in architecture and civil engineering from Lehigh University, Sam went on to obtain his M. Arch from the Southern California Institute of Architecture (SCI_Arc) in 2004.

He practiced in Los Angeles with Studio Works Architects before moving to India in 2006 to work with Studio Mumbai and founded Case Design in 2013. In addition to his experience in the design and construction of architectural projects, he has worked on furniture, interiors and exhibitions which led to the establishment of Casegoods in 2015. (Quelle: Website Case Design)